When Techno Edge reopened at the start of this semester on January 11, scores of students flocked to the newly renovated Engineering canteen, be it to check out the new stalls or to try out the food their seniors have been raving about during its closure.

The hype could be expected as Techno Edge was a well-loved place for over 30 years before it shuttered in 2018 for redevelopment works. During the canteen’s two-year closure, students who had classes in the Engineering vicinity often went to the Arts canteen, The Deck, causing intensified lunch crowds there.

Time flies and it is halfway into the semester now, so if you have yet to check out the food or you have been putting it off because of the anticipated high crowd level, here’s a quick rundown on the lunch options there for you!

Techno Edge has 12 food stalls, and those who have eaten there pre-renovation would be happy to know that 5 of the stalls are returning operators!

The canteen also has an aircon segment with 3 new stalls:

Coffee connoisseurs can also hop over to the nearby Starbucks outlet, which opened on February 1, for their caffeine fix.

Given the crowd levels and also a heightened preference for takeaway during this pandemic period, the canteen has also introduced reusable containers for takeaway! This cost-saving and environmentally friendly initiative lets you pay $0.10 for reusables instead of $0.30 for disposables. Simply return the empty container to the canteen’s tray return points afterwards!

If you are unfamiliar with how to get to Techno Edge, the following is a guide to help you, and there are also directional signs around the vicinity to lead the way. 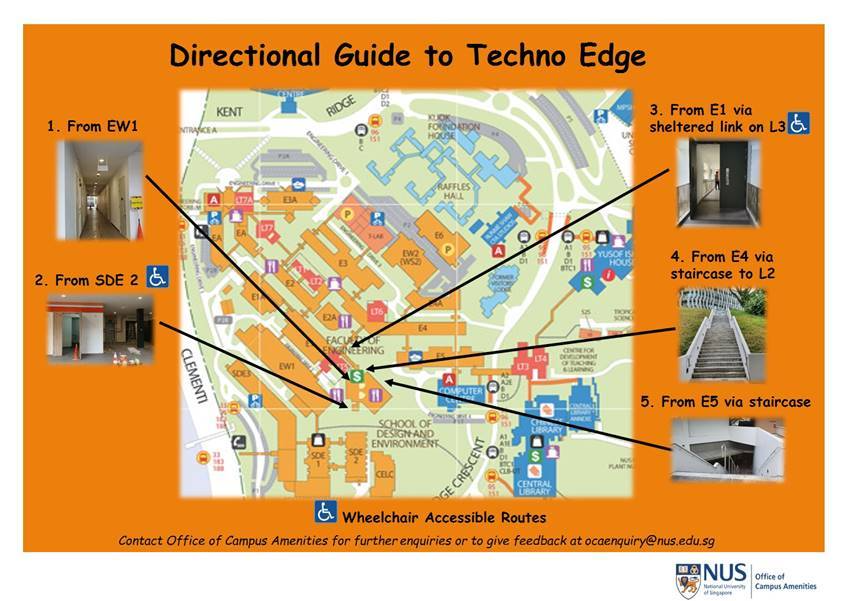 A Walk Down Memory Lane

A scroll through the pictures in the post reveals the stories of the staff who have been working in the canteen, many of them for around 30 years, or for even longer! The Chicken Rice, Yong Tau Foo and Soya Bean drink stall owners have retired upon the canteen’s closure in 2018.

The canteen has captured many fond memories over the years. In particular, the Yong Tau Foo stall owners recounted the time when their stall won an NUS canteen competition, which was judged by celebrity chef Violet Oon, back in 2016. Students may also remember the catchy and interesting drink names from the old drinks stall, such as “Student Companion Black Tea”, “Campus Best Milk Tea” and “Brew Awakening Black Coffee”, which are sure to have kept them awake during classes!

The camaraderie among the stall owners was also evident as they all worked together to build a canteen fund for putting up festive decorations. If you are interested to read more, do check out the Facebook post here! But to those of you who were around during the time of the old Techno Edge, do brace yourself for a wave of nostalgia as you look through the photos.

Looking forward, Techno Edge is also expecting the opening of a Liho Cafe this coming April.

For business students, there is also the Terrace canteen reopening, which is slated to reopen around end-2021, to look forward to!

The reopening of Techno Edge has been warmly welcomed by students and staff alike, as evidenced by the large crowds. Will the hype be here to stay? Only time will tell, but the canteen has definitely brought about more convenience for the engineering students when it comes to mealtimes.

Now that you have had the chance to try out the food, let us know what you think of the newly renovated Techno Edge!


NUSSU The Ridge is the largest student-run publication in NUS. Find out more.