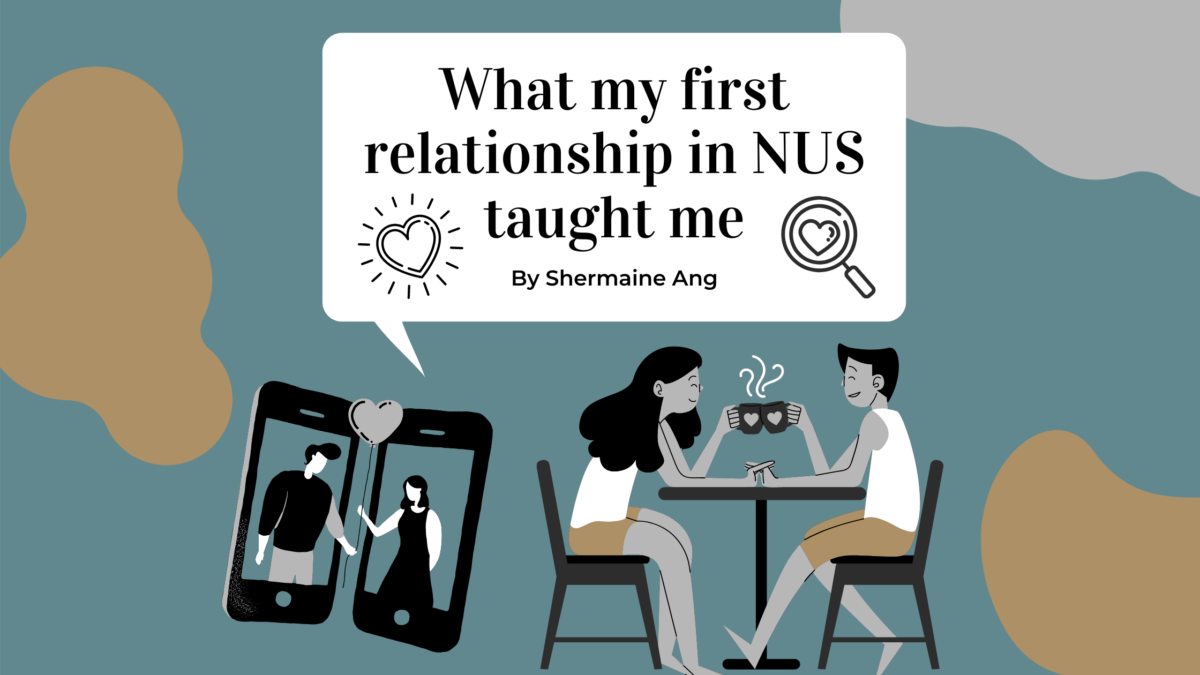 Clinical psychologist Dr. Meg Jay’s book on making the most of our twenties, The Defining Decade, opens with a powerful quote from David Brooks about how happiness has more to do with whom you marry than with what college you attend. Yet, he observes, there is not a single college course on being smart about marriage.

University is a time where many of us start to diverge into different stages of married life. In my final-year batch, I have friends who’ve never dated, some of whom are happy being single, others who aren’t. On the other end of the spectrum, some people in my batch are getting engaged and BTO-ing, upping the ante for those in a relationship to think about their futures. Weighing on my mind are the questions: when is the right time? What’s too fast or too slow? How will I know when I’m ready?

Meg Jay, who bases her book on nearly two decades of work with hundreds of clients and students, would say the pressure is good—it forces us to think and talk about the future with our partners early on, in our twenties. She thinks it is important for couples to see if they are on the same page about marriage, to determine if they want to seriously invest in the relationship.

While we think of our career as something we can plan out—in fact, it is perceived as admirable when someone is pursuing clear career goals—in matters of love we say to go with the flow, because we can’t plan or force love. But we know full well that if we just stay home every day, chances are, we won’t meet anyone. A number of people I know have been on Coffee Meets Bagel for a while, and seeing so many people around them coupling up, are getting a little anxious. “This should be the fun part!”, I want to tell them. Don’t get worked up over finding someone–that’s where the pressure to date works against you–but enjoy your social hobbies and getting to know new people. When it happens, it happens.

My romance kind of fell into my lap. We got together by chance. We were grouped in the same performance in hall band, which gave us pretext for small talk when we ran into each other at the bus stop. Comically, we took a short 2-stop bus ride together to the Deck. Afterwards, he texted me a link to a video he mentioned. That was the start of our Whatsapp thread. I forgot about his message and replied him a whole week later, on impulse. And the rest is history… Subsequently, when my single friends asked me for advice on how to find someone, I would just tell them to be open, to not be too quick to write people off, and to keep doing what they like to do.

Going into my first and current relationship, I really had no idea what to expect, my only reference being the barrage of rom-coms I grew up on. Favourites included 10 Things I Hate About You, When Harry Met Sally, 13 Going On 30, A Cinderella Story, Wild Child, She’s The Man…I’m not proud of it. Coming from an all-girls secondary school and JC where everyone was always busy mugging, I had little interaction with guys. All my friends were girls. Hall was a major culture shock. I’ll admit straight off the bat that I wasn’t in the best headspace when I entered my current relationship. The pressure to get into a relationship came from feeling lonely in hall. I did not make many close friends in hall and I just had a falling out with one. While I enjoyed my CCAs of dance and band and they kept me busy, I felt empty outside of them. I would dread having to be seen eating alone or dabaoing hall food to my room. I was lost. When a guy from band paid attention to me, it was a welcome distraction…

Three years on, I got a reality check. Things are not as cutesy as when we first started dating, some butterflies have left the chat, but the company is still something I treasure a lot. I personally find it hard to make good friends in school, since the semesters are short and hectic, and I see different people in different modules every semester. An online semester during the height of the COVID pandemic didn’t help things. It was nice to have someone by my side through university. Dating in university has its advantages—you’re going through this transitory stage of life together. It’s an experience that is teaching me a few things about sharing a life with another person, and I want to share them with you:

#1. I don’t need to be completely self-possessed to be in a relationship.

I used to think I would need to know myself, to get to a point where I’m proud of myself, before I can be with someone. We all know the cliche: “you have to love yourself before anyone can love you”. There’s definitely truth to it. There was never a clear point at which I knew for sure I was ready, per se–when are we ever? But I went into this relationship at a low point and it’s turning out pretty okay. I confide my struggles to him. We’re both imperfect and try to support each other. As the beautiful Ben Platt song goes, the hope is that we can “grow as we go”.

#2. A relationship is not the cure to my problems.

Unsurprisingly, the relationship did not make all my problems (stress, loneliness, low self-esteem, etc) magically go away, as I somehow imagined it would–rom-com thinking 1101. A TEDx talk by the couples counsellor Susan L. Adler enlightened me on how even though it is often our own issues and unhappiness that take a toll on our relationship, we think it’s the other way around. I brought my problems into the relationship and made the mistake of blaming the relationship, thinking of it as the source of my problems. It’s hard to separate the two, but I’m trying to work on my own mental health–with regular walks, meditation, journalling, self-help books, for instance–for a better relationship.

#3. Relationships can be hard.

You’re dealing with another person–their fears, insecurities, flaws and complexes. On some days we are not at our best: we’re scared, stressed and frustrated, and we take it out on those nearest and dearest to us. This is what both parties have to deal with–each other’s bad days.

#4. It’s important that we have compatible personalities.

Meg Jay maintains that the more similar two people are, the more they are able to understand each other. I often worried if we were incompatible. For the longest time, I didn’t understand what compatibility meant. Meg Jay’s book offered me a framework to approach it. She notes that the obvious criteria that people match themselves and others on, such as socioeconomic status, education, age, ethnicity, religion, politics, attractiveness, hobbies, values, and intelligence, are what researchers call “deal breakers, not match makers.” She asserts that one important matchmaker is personality, citing a simple and widely researched model of personality, the Big Five. The Big Five refers to five factors that describe how people interact with the world. Each lies on a spectrum, where similar scores would mean two people have compatible personalities. The test can be found at https://www.personalityassessor.com/ipip300/.

The NUS Aphrodite project puts this idea of compatible personalities to the test. The dating app uses the Nobel prize-winning Gale–Shapley algorithm to match participants based on a 20-minute questionnaire of roughly 100 questions on their values and lifestyle preferences. Participants reflect on their work habits, their thoughts on showing affection in public, their degree of engagement in politics, and even how often they thank the bus driver before getting off the bus.

The program narrows down a pool of potential matches for each participant based on their deal breakers. Then, it compares the similarities between participants to generate a compatibility score. To compute this score, the program accounts for participants’ questionnaire answers as well as their typed list of hobbies and interests at the end of the questionnaire.

#5. It’s even more important that we learn how to deal with incompatibility.

Finding someone with a compatible personality isn’t the end of the story. It’s always a fine line between finding the “right” person and making it work. No one is perfect and there are bound to be differences. Working through differences is far more important. As Leo Tolstoy says, “What counts in making a happy marriage is not so much how compatible you are, but how you deal with incompatibility.”

It turns out that Neuroticism, or the tendency to be anxious, stressed, critical, and moody, is far more predictive of relationship unhappiness and dissolution than is personality dissimilarity. Differences are perceived in a negative light by those who score high in Neuroticism. Meg Jay points out that anxiety and judgments about these differences can lead to criticism and contempt, two leading relationship killers.

I’m happy to report that my days of dreaming about a rom-com relationship and pretending I’m Meg Ryan are over. Either my partner killed my dreams, or being in a relationship with a real person is a whole other ball game, in the same way life is not like the movies. Movies and social media skew everything. The spark is going to fade into routine. The two of us are going through life together, and life can be a drag. Just consider how burnout has been added to the World Health Organisation’s latest catalogue of diseases and injuries. It is characterised by feelings of energy depletion or exhaustion, increased mental distance from one’s job, or feelings of negativism or cynicism related to one’s job and reduced professional efficacy.

So, rom-com or reality?

After the highs and lows and everything in between, I’ll take the real deal over the dream. I’m not perfect, and I don’t expect or want my partner to be either. Learning to be together, to deal with each other’s moods and problems, differences in our habits and the way we do things, can spark personal and interpersonal growth, and turn out to be a pretty fulfilling, shared journey. In the end, it’s not a big deal whether you date in university or not. Some university couples break up. For many, the dating game continues after university. After all, singles now make up 70% of those in the 25-29 age group, according to a 2016 General Household Survey. Moreover, feelings and life itself are unpredictable. There’s no shortage of horror stories about couples breaking up after they get a BTO flat—and not getting their money back—or just the generally terrible and awkward aftermath. It’s best not to rush into life decisions like relationships and marriage out of pressure. As Carol Dweck tells us, make growth-based decisions instead of fear-based ones, whether you’re in a relationship or not.